The post explores the significance of the first National Gay Conference that was held in Cork in 1981.

It was like my bookshelf came to life!  The Gay American History @ 40 conference in New York in May 2016 gave me a unique opportunity to meet with and engage with my ‘heroes’, the LGBT scholars whose pioneering work has inspired and stimulated my own work.

I have long admired, and been inspired by, the work

of John D’Emilio, Jonathan Ned Katz, Esther Newton and the many other LGBT historians who gathered together at this conference – their scholarship and activism has motivated me to want to work on documenting, analysing and sharing the rich history of the Cork LGBT community.  At the early stages of my own work on the Cork LGBT Archive, John D’Emilio had taken the time to engage in email discussions with me, providing invaluable advice and encouragement.  It was a pleasure then to be able to meet him at the conference, to be able to meet and engage with my ‘heroes’ and to be present for a stimulating, and at times heated, discussion on the current state of LGBT history.

Gay American History @ 40 was a combination conference, a reunion of academic / activist comrades and a tribute to the inspirational work of Jonathan Ned Katz.  The conference marked the fortieth anniversary of Jonathan Ned Katz’s Gay American History: Lesbians and Gay Men in the USA (1976) and it provided an opportunity to discuss the ways in which theories, categories, research methods and priorities have been constructed, challenged, and reconstructed over the last forty years of historical research on sexuality and gender.

END_OF_DOCUMENT_TOKEN_TO_BE_REPLACED 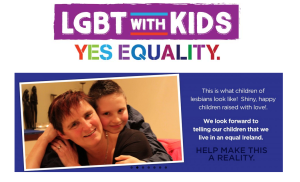 I am still reeling from the emotional rollercoaster of the weekend as my country finally voted to respect me, my son, my family, my friends and my community.

This weekend Ireland became the first country to legalise same-sex marriage through popular vote.  And by a resoundingly popular vote – 62.1% overall, with only one constituency (Roscommon-South Leitrim) voting No.  The highest YES vote was in Dublin South East with 74.9%.  In the 5 Cork constituencies the YES vote ranged from 56% (Cork South West) to 65.8% (Cork South Central).

It has been a long and hard journey to get here.  This weekend’s vote is the result of decades of LGBT community activism all over Ireland.  Since at least the 1970s Irish LGBT people have supported one another to build community and have pride in who we are, despite the consistent messages from the church, the laws, the media and society telling us that we were sick, evil, lesser and unworthy.  We set up LGBT organisations, centres and services.  But we also created community – we created the positive spaces where LGBT people could be together, to love, to party, to affirm each other – to counterbalance all the negativity.  We gave each other the strength to come out in ever increasing

numbers.  And that’s what made the difference.  People respond to the personal.  Its easy to vilify a concept – a gay man, a lesbian family etc. – its harder to hate the person standing in front of you: your son, your daughter, your mother, your uncle, your neighbour, your colleague.  Its the stories of real people’s lives that have convinced so many people to vote YES.

END_OF_DOCUMENT_TOKEN_TO_BE_REPLACED

Last Saturday I attended Lines of Dissent, the 12th LGBTQ History & Archives Conference, in London.  It is a such a pleasure, and a rare one at that, for me to sit in a room full of people who share my obsession with unveiling the rich histories of LGBTQ communities and with preserving, archiving and sharing these histories.  It was so exciting to hear of the various archival and historical projects underway and to visit the display stands.

conference.  Clarie Hayward has created a Storify which brings together the various tweets sent to #linesofdissent during the day.  Having tweeted and retweeted each other throughout the day, we eventually met face-to-face in the bathrooms as the conference was ending!  Good to put a face and voice to the tweets!

Returning from the conference I felt inspired to continue working on the development of the Cork LGBT Digital Archive.  The CorkLGBTHistory site is currently being developed.  I am attempting to create a chronological record of key events and organisations in the development of the Cork LGBT community from the 1970s onwards.  It is very much a work in progress.  Much work needs to be done in terms of digitising images for inclusion in the site.  I am hoping that the site, as it develops, will stimulate people to comment and contribute and to maybe root around in their attics, basements, closets or wherever to locate long forgotten but invaluable artefacts and memorabilia. END_OF_DOCUMENT_TOKEN_TO_BE_REPLACED

The Cork Branch of the Irish Gay Rights Movement (IGRM) was established in 1976.

The aims of the IGRM were to be achieved through

(i) Reform of laws relating to homosexuality

(ii) Removal of social prejudice and misconceptions regarding homosexuality 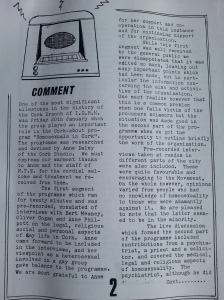 was aired on Cork-About, the Cork RTE programme.  This was significant in drawing attention to the issues affecting gays living in Cork and to highlight the activities and services provided by the IGRM.  Oliver Cogan wrote an article about the programme in Sapphire, the Cork IGRM’s newsletter.  He notes that “Whatever the general consensus of opinion, the programme certainly stimulated discussion.”

Below is a full transcript of the article:

END_OF_DOCUMENT_TOKEN_TO_BE_REPLACED

As I trawled through boxes of archival material recently, I found this hand written notice for the Women’s Discos which were run on Friday nights in the Other Place in the 1990s.

It is unsigned.  The hand writing is very neat and clear.  It includes a word count, so I would assume it was written for inclusion in a newsletter or in GCN.

Does anyone know who wrote this?

It provides a good snap shot of the Women’s Discos, the atmosphere inside the club and the experiences of women coming to and leaving the club – security cameras to ensure safety.  And it sings the praises of the D.J.  – Diane Jefferies!

Here is a transcript of the article:

Want to get your glad rags on and boogy on down, or just sit in a quiet corner and watch other women shed their inhibitions?  Then it is about time you came to the Women’s Disco.  From 11.00 pm onwards on the first Friday of the month knock on the door of the Other Place and the night and space is yours. END_OF_DOCUMENT_TOKEN_TO_BE_REPLACED

Filed under Lesbian and Gay History

Oral History interests me.  I am intrigued by the richness of the stories that people tell about the past and by how these stories help us to develop a fuller and more complex understanding of our history.  Oral Histories are particularly important when we are exploring hidden histories and marginalised communities.  They help to reveal the history that might otherwise remain invisible.

My interest in oral history, and in the history of the lesbian and gay communities in Cork, has recently been reawakened.  When I carried out oral history interviews in the past I used a tape recorder and then transcribed the interviews – a slow and laborious task.   Technology has advanced significantly since then and I realised I needed to up skill to do this work more effectively. END_OF_DOCUMENT_TOKEN_TO_BE_REPLACED

I have been interested in lesbian and gay history for some time. As an active participant in the Cork lesbian community since the 1980s I have really appreciated being part of such a vibrant, active and politically aware community.

As well as campaigning for lesbian and gay rights and providing services and supports to LGBT people, the lesbian and gay community has played a vital role in movements for social justice and political change in Cork.

Yet this community, like many other LGBT communities worldwide, has been largely invisible in historical accounts and its contribution to social and political change and developments largely unacknowledged. END_OF_DOCUMENT_TOKEN_TO_BE_REPLACED